“As the rain came down in Dallas Texas, the water level inside the hotel basement rose and within a matter of hours, several hundred trade show stands, ours included, were six feet under water. It is something nobody could have foreseen and if it hadn’t been for small attention to detail, the entire experience would have been a write-off. Fortunately, I had asked the sales staff that was on-site to take a photo of the completed stand. It turned out to be the only evidence we had to prove that what we said was on the stand was actually there. The water damage was such that nothing was retrievable and no-one was allowed back into the site until a bulldozer had cleared it. We received a full payout from insurance but I know from the organizers that many didn’t.”

Some event planners may not have to deal with major emergencies in the span of their careers, but this doesn’t mean that emergency preparedness can be ignored.

As Murphy’s Law states, “anything can go wrong will go wrong” and event planners need to be equipped to best deal with these situations whenever and wherever they arise. 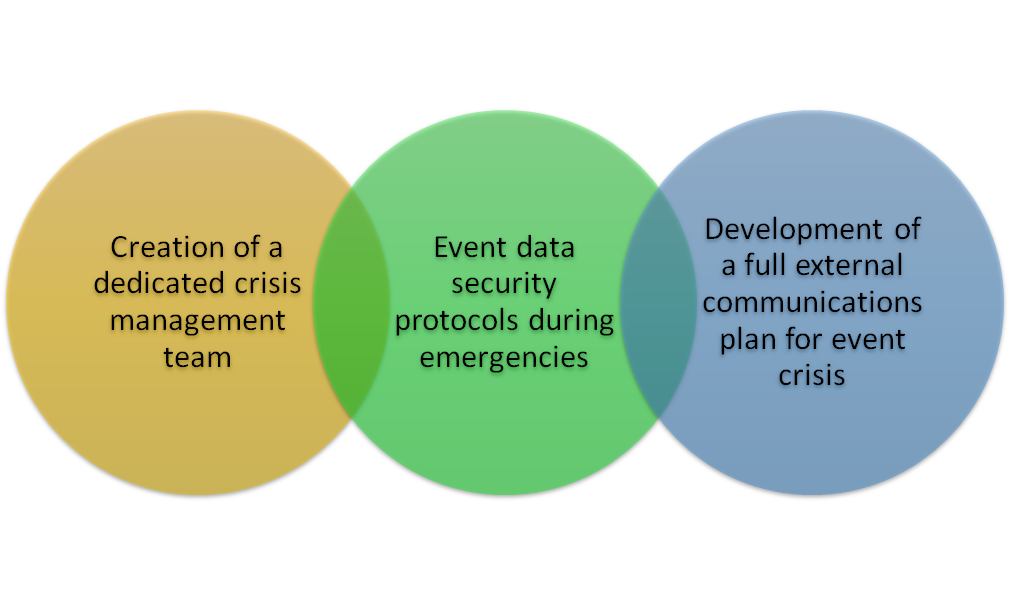 While it’s good to give an entire events team, a disaster and emergency preparedness briefing and training, the ideal way is to create a dedicated crisis management team that will step in during major incidents.

What could be classified as a major incident? Take the following as examples:

Event staff will be the first responders during these unexpected scenarios. However, a dedicated crisis management team elevates an organization’s disaster preparedness to a different level. Instead of having crisis management on top of their responsibilities during the event, a dedicated crisis team is laser-focused on just making sure that a crisis plan will be executed seamlessly when needed.

A crisis management team would be a skeletal or scaled down version resembling the workforce involved in an organization’s day-to-day operations, plus the specific disaster management functions. If and when a crisis happens, this team will be activated and serve as the mission control orchestrating the different elements of crisis management.

Meetings, conventions, conferences, trade shows, and other events are data hotspots. The volume of data — some of which are personal, sensitive, and confidential — collected during events is increasing as more organizations become more data-driven.

That said, it is up to event managers to make sure that all data collected during these events are secured even during emergencies.

The recent implementation of the GDPR has made event managers rethink how they obtain and secure the data they collect during events. Now that disaster preparedness is in the mix, event managers should once again assess whether the current data security protocols they have cover emergency situations.

There’s no sugar-coating it.

Disasters make attention-grabbing headlines. The bigger the disaster, the more controversial the news.

Major event disasters and emergencies will attract major media attention. One of the things that could make matters worse is when there are multiple spokespersons feeding the media contradicting information.

This is an often neglected aspect of event crisis management. Event planners don’t really expect, or foresee, to find themselves in the middle of a major crisis that attracts major media coverage.

Until, of course, they do and it’s too late to put together a contingency plan.

Developing a fully realized external communications plan may seem like luxury more than a necessity. On the other hand, it’s better to have it ready to be deployed if needed as opposed to coming up with a communication plan on the fly.

Some basic elements to include:

Most organizations prepare an extensive external communication plan to promote their events, why not do the same for crisis management?

On Top of a Basic Crisis Management Plan

That said, these ideas may not be included in the mandatory emergency and disaster preparedness strategies, but prove to be valuable when implemented.

COVID-19 disrupted operations around the world, and in-person events were no exception. Event planners for... READ MORE

How to Use Gamification to Boost Attendee Engagement

The ability to keep audiences engaged is a defining success metric for any event, but that isn’t always easy in the era... READ MORE

5 Ways to Boost the Value of Hybrid Events

Virtual events have exploded in the past few months, but now that the world is beginning to embrace in-person events... READ MORE