Event Management Software Everything you need to create inspirational events.

Email Marketing Expand your brand awareness by connecting with the right attendees.

Venue Sourcing Easily send RFPs and book the best deal for your meetings and events.

Integrations Integrate your valuable event data into your sales and marketing ecosystem.

Welcome to another edition of Aventri's Connect Weekly column, where we share the top five news stories from the week that today's meeting and events planners should know. We aim to cover everything from the worlds of events, technology, business, marketing, social media, travel, hospitality and beyond. Check out the top stories from the week of October 4, 2019.

Resort Fee Legislation Could Change How Hotels Are Sold Online

A new bipartisan piece of legislation, the Hotel Advertising Transparency Act of 2019, could change how hotels and travel agencies sell rooms online. The law specifically calls for the display of hotel resort fees to protect consumers from the fees. “It is projected that in 2019, over three billion dollars in revenue alone will be collected from consumers due to these hidden fees,” Congresswoman Eddie Johnson of Texas says. “Consumers should be able to enjoy their vacation without being ripped off and financially burdened. This bill would require that the prices advertised by hotels and online travel agencies must include all mandatory fees that will be charged to a consumer, excluding taxes." Read more.

Officially open for business on November 23, 2019, Club Med has announced its first-ever Exclusive Collection resort in the Dominican Republic. Set on 93 acres of beach, the all-inclusive eco-chic hotel is an ideal location for a corporate incentive event or retreat. The Hotel will offer guests four villages, adult exclusive space, a top-secret chocolate room, four restaurants, six bars, and more, all with an eco-chic atmosphere. Read more.

Does your website receive fake traffic? According to researchers, fake traffic is becoming more and more common. In fact, within four months there has been an 18 percent increase in fake traffic. To protect your analytics and bottom line from fraudulent traffic you can incorporate these four tactics: tighten your Google Analytics filters, monitor your server logs, block malicious traffic, and find fraud-fighting tools. Read more.

Weapons Screening Technology to be Tested with Convention Attendees

Metro Toronto Convention Centre announced it will use radar-imaging and AI technology on convention attendees to stop security threats before they reach the facility’s entrance. The test known as HEXWAVE will take place later this year. CEO of Liberty Defense, Bill Riker, says "We believe that HEXWAVE’s ability to operate in both indoor and outdoor environments, in combination with its modular and scalable design, will help reinforce infrastructure safety while maintaining a positive customer experience.” Attendees will be unaware that HEXWAVE is being used to detect and identify weapons that may be stored in bags or under attendees’ clothes. Read more.

To put an end to their water scarcity concerns and prepare for a possible future where obtaining clean drinking water is more difficult, Singapore announced that it is building a new technology: carbon fiber aerogel sponge. This technology will address Singapore’s water dependency by absorbing contaminants and microplastics found in water. "What we have become used to as reliable water, may quickly change — so we have to be prepared, we have to be thinking about the infrastructure in advance," Shane Snyder, executive director of Nanyang Environment & Water Research Institute at Singapore's Nanyang Technological University says. "There's a big drive to become water independent — to control our own future — and that is largely dependent on the technologies we're developing." Read more. 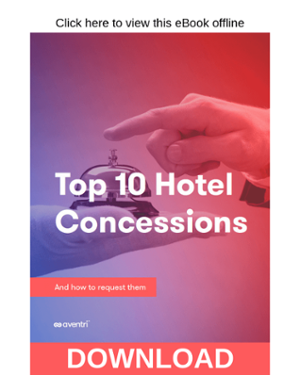 Welcome to another edition of Aventri's Connect Weekly column, where we share the top five news stories from the... READ MORE

The Top 100 Event Venues in Europe

With so many wonderful countries, cities, and venues across the globe to choose from, it can be overwhelming for... READ MORE

The Top 4 Resolutions for Event Planners

Meeting and event planners, what are your new year resolutions for 2020? As the New Year begins, many people are... READ MORE